In week four i started my first twink for this year. 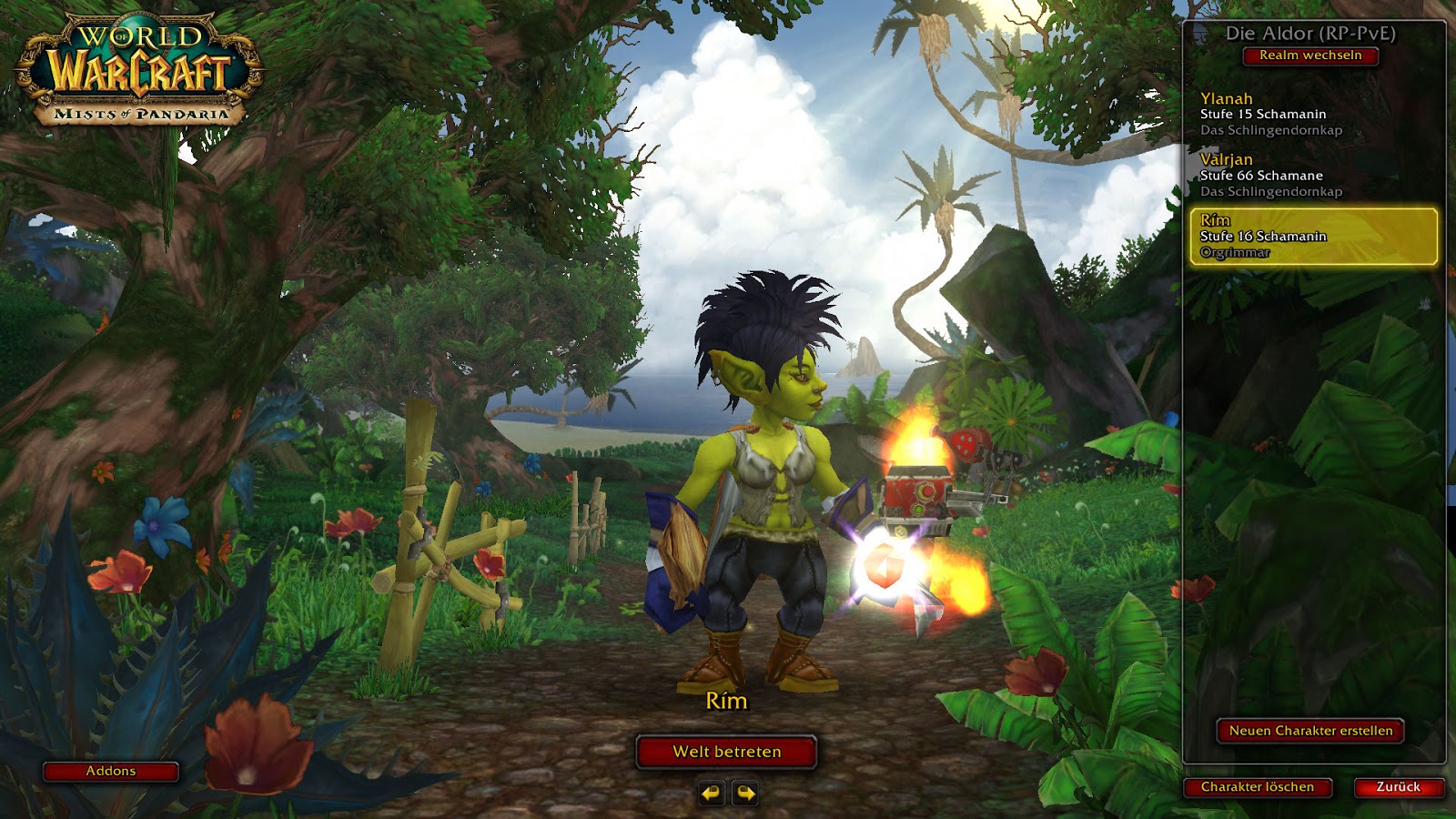 This is Rím. Rím is the daughter of a screw factory owner  named Gwarz Drehzahn. He allways wanted his daughter to take over the factory when she is old enough. So she had to work a lot for her father when she was younger. But Rím wasnt interessed in the bussiness of her father. The struggeld a lot. One day she went away from home and left here family. She was still very young and eventually got lost in an era called durotar. Near starvation a wandering shaman found her and took care of her. From this shaman she learned the arts of shamanism. When she was old enough to take care of her self, she thanked the shaman and went out to discover azeroth for here own. She wanted to take the things she had learned to cure the weak and fight for those who are underpressed by the stronger ones. Now she is standing in Orgrimmar reading a piece of paper on the wall which says ...

I level her to level 25 in two days and then switched back to Valrjan. Now i have a twink i can RP with. 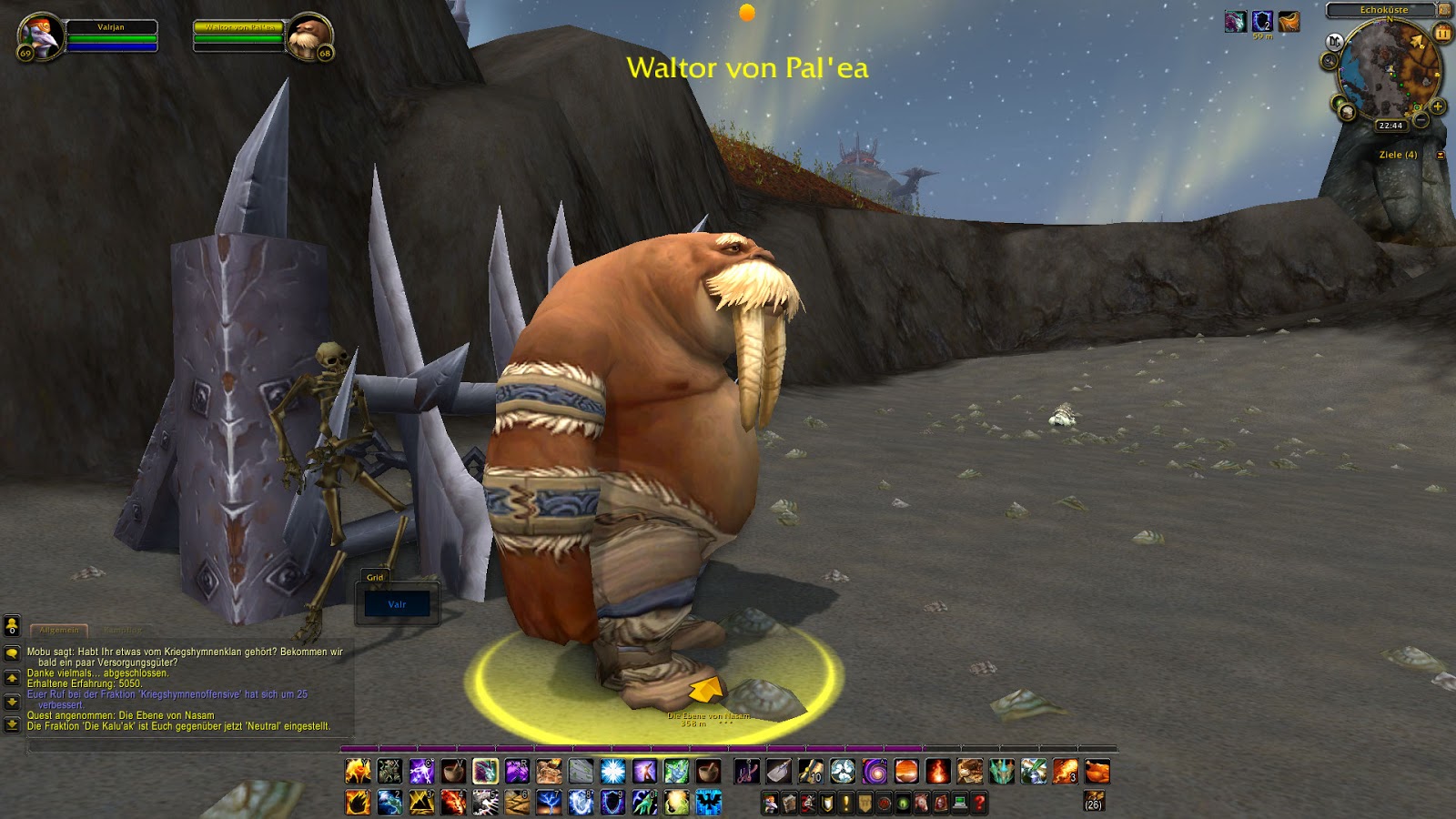 With level 70 i started leveling. With 70 you can fly in nordend which is really important. I discovered the race of the Tusken which of course reminded me of Tuskar from Dota. I did all quests i could find from this race. They werent really spectacular but it was something i cared about. Questing in WoW never felt so good until this point. The thing is: Questing only became better form here on. 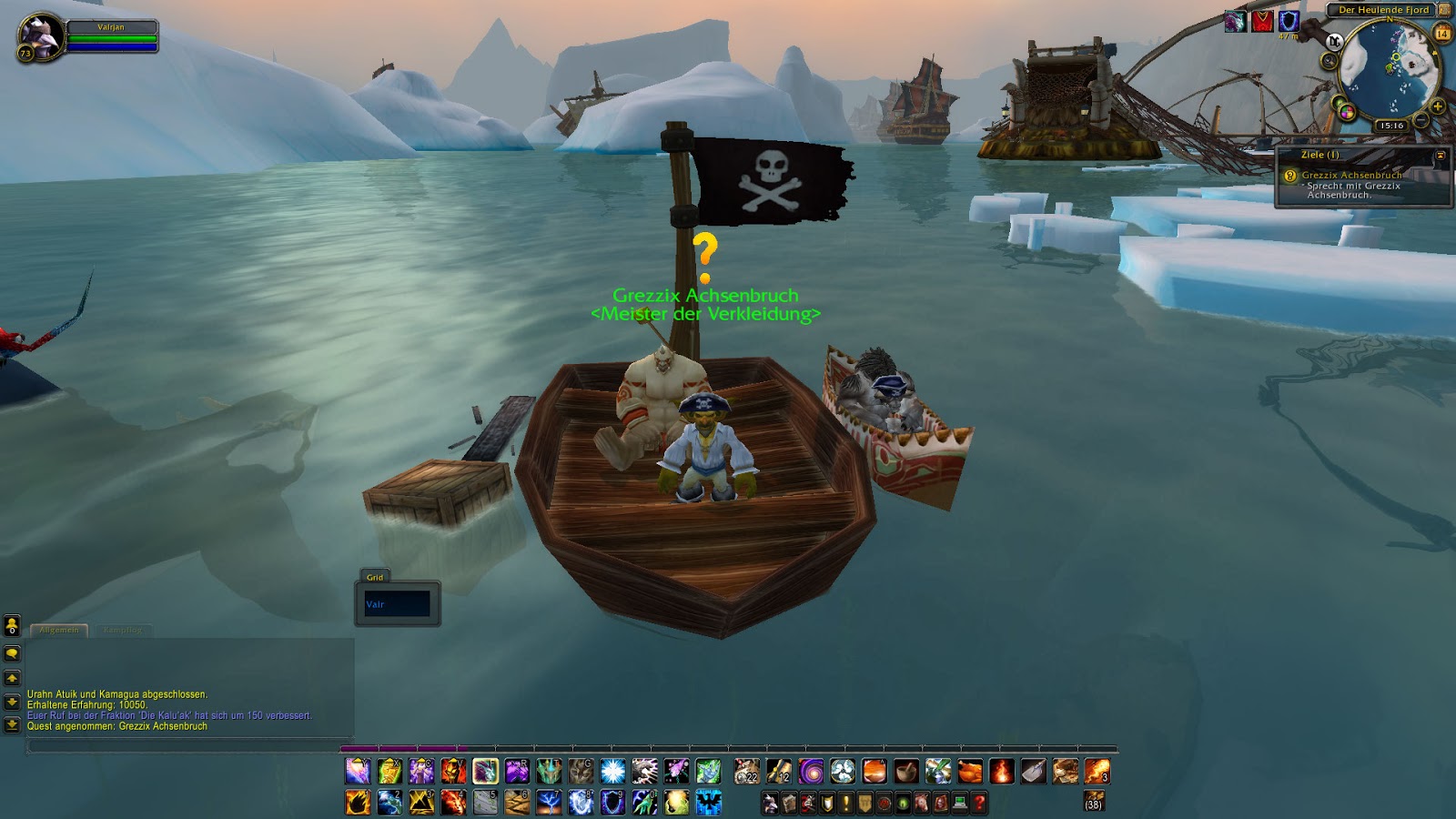 This is a pirate goblin i stumbled across in one of my Tusken Quests. He thinks he is the greatest pirate captian of all and that he will conquer the seas with his "ship". 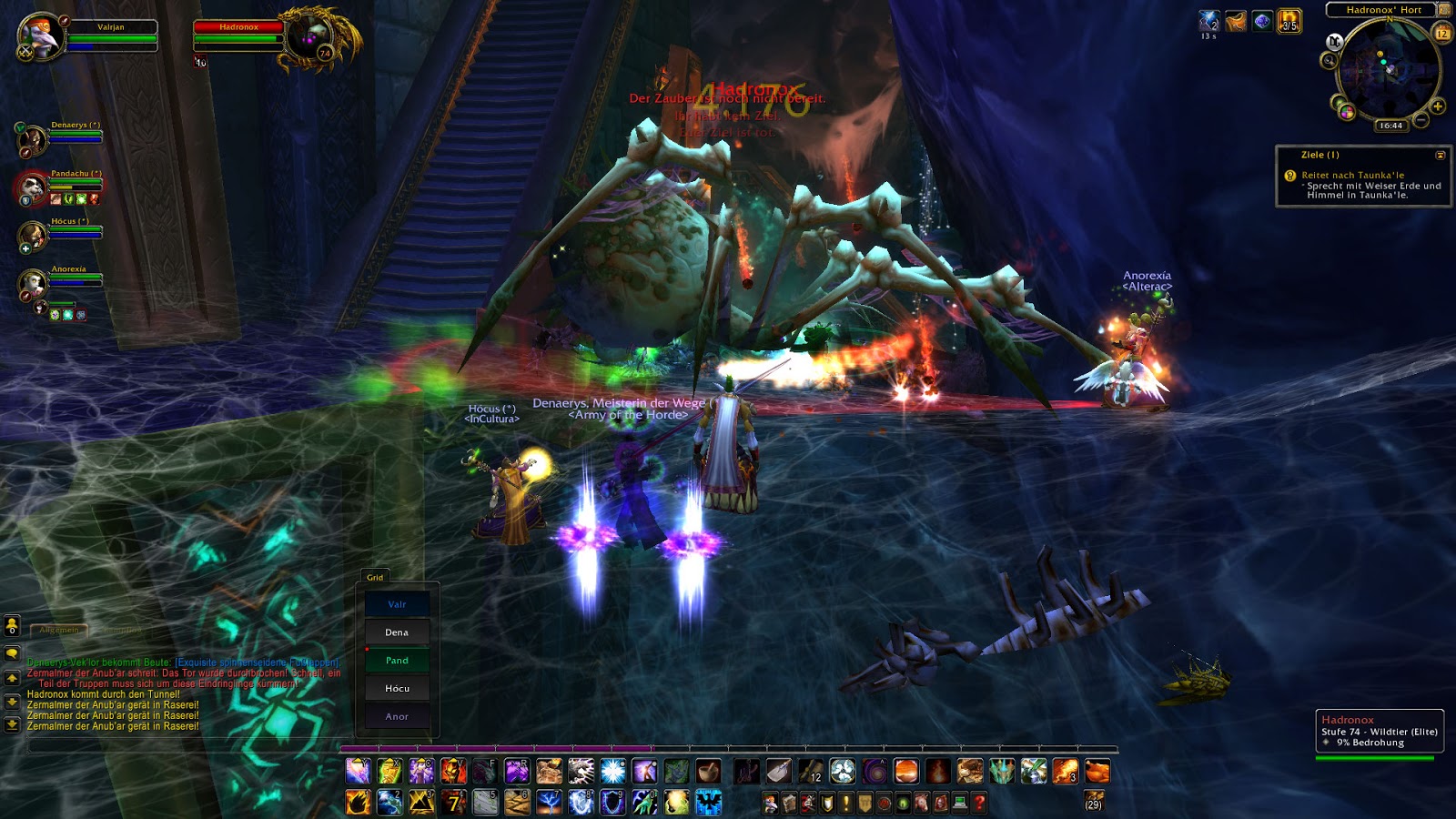 Rarly i did some dungeons. Now this is a boss from one of my favorite dungeons so far. A giant spider with a lot of spiderlings (Broodmother). 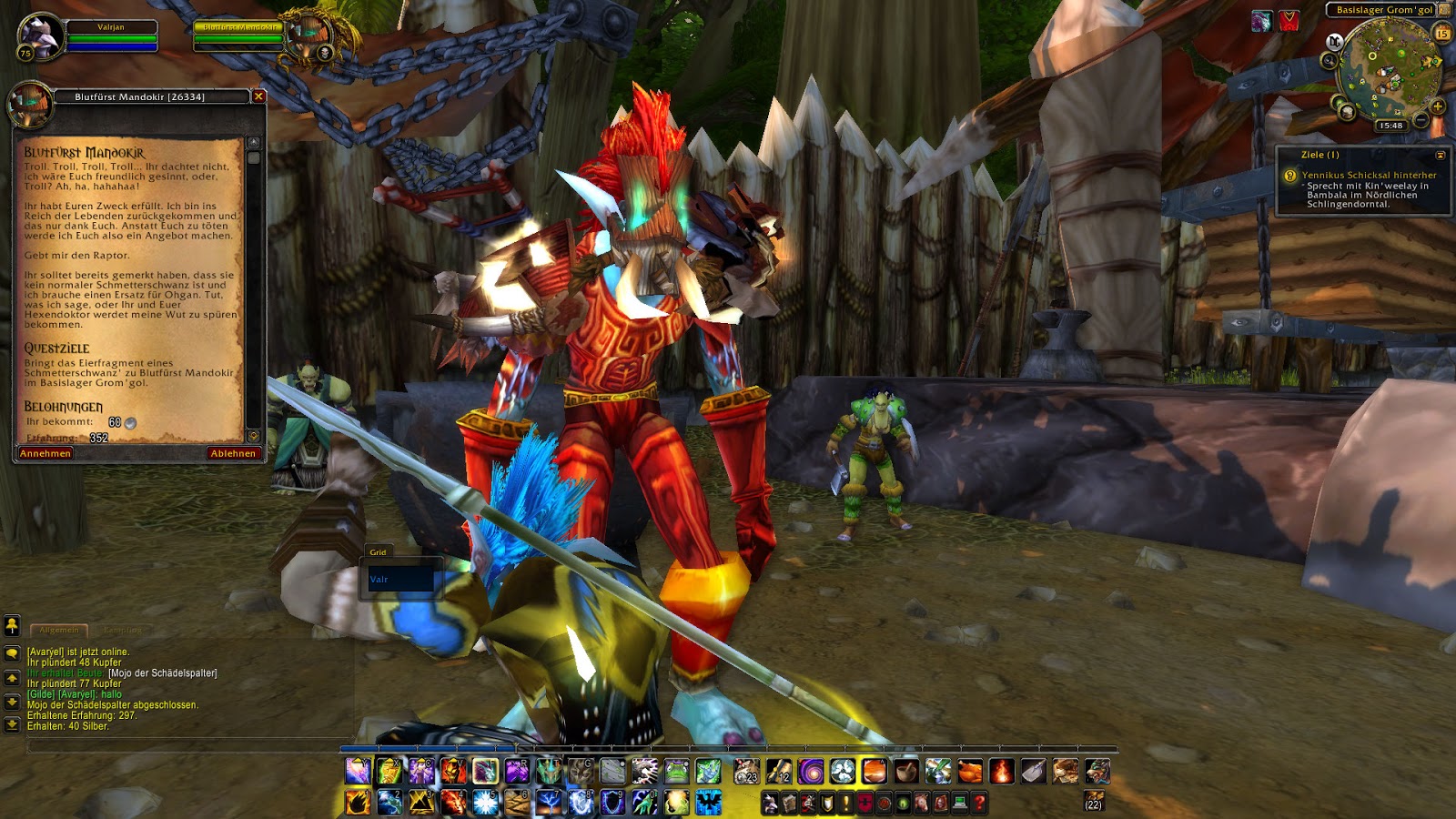 Now my Troll of the week has to be Mandroki who is a NPC (and might become a Boss later on). With my knew favor for Quests my new goal is to do all Quest who are somewho Troll related. So i did this somehow long low level Quest in Stranglethorn Valley. I resurected this guy from the dead just to be betrayed by him. I think i will meet him again. Dalarn. The city of mages. I went to Dalarn to start a quest located in Zul'Drak. Zul'Drak is the home of an ancient Troll tribe called Drakkari. The Drakkari where famous for being the most violent tribe of all Trolls. Therefore they got banned from the other Troll tribes. The settelt far north and when the old world burst Zul'Drak in Nordend became there home and they become ice trolls. The quest i started though was about an Arena located in Zul'Drak. The quest said that you would need about 5 heros to play this quest. I didnt care and started the quest alone. I did quite well against the first boss in the arena, when suddenly a PC called Dragonblade came form the sky to aid me. Together we defeated all the bosses the Arena of Zul'Drak threw at us. In the end we where the new Champions of Zul'Drak. That was one of my best moments in WoW so far. It was really tense and spontanious.Thank you Dragonblade again. Your legend will not be forgotten. 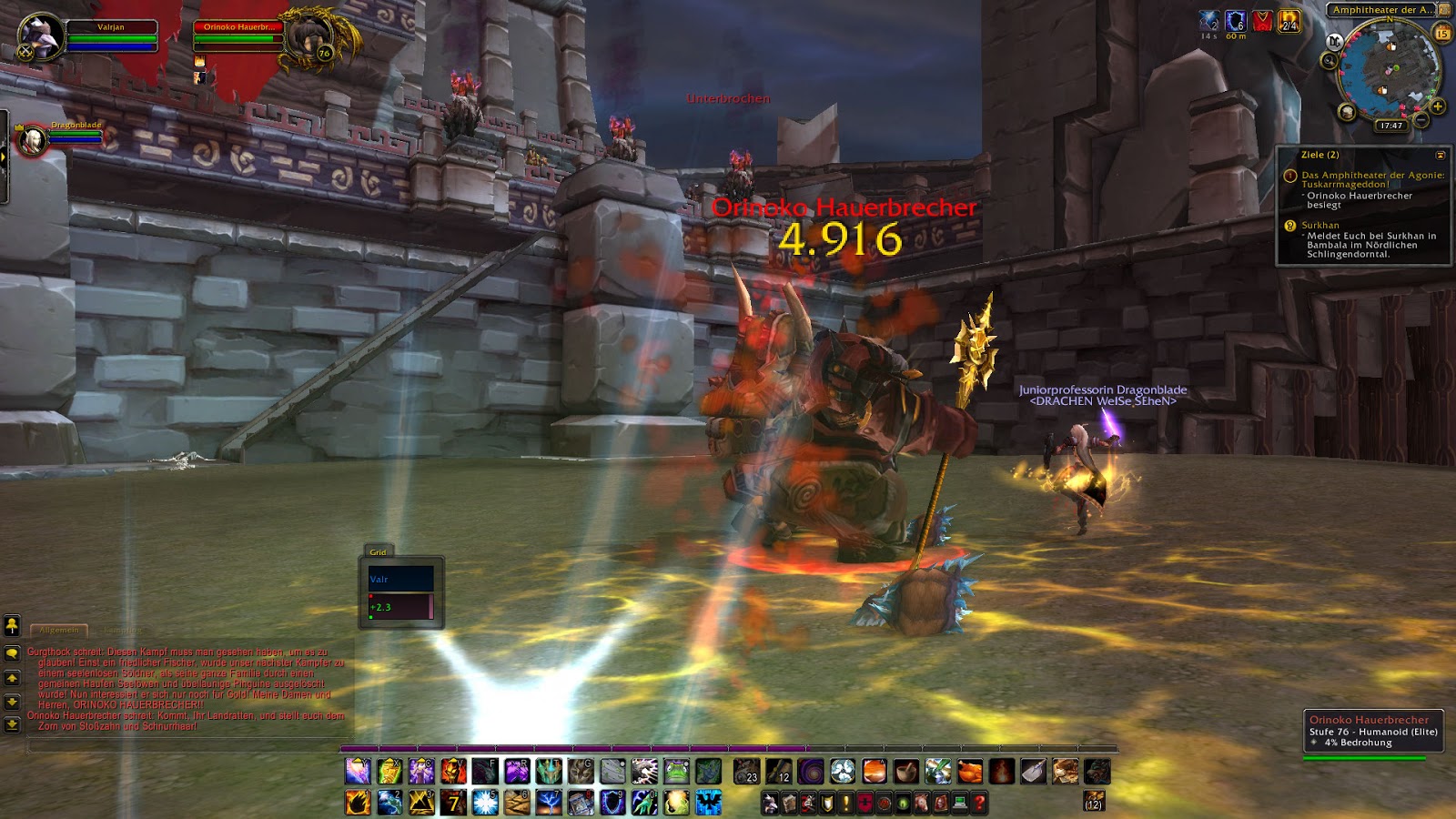 Dragonblade beating the hell out of a Tusken Arena Contendor (Boss).