After quite some resonance on my first interview, I got a hole list of people already that i want/need to interview. I will create a blog for this series in the future. For now I will just post the newest entry here in the forums, and link all the old one's to a old WoW blog of mine.

Today i got a interview from Ynaar, my first Alliance interview.
Enjoy 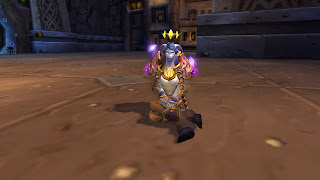 Firewire: Thank you Ynaar for taking your time and for giving me this interview. Could you maybe introduce yourself a little? Tell me about how long you are playing WoW, why you play on AD, how and when you started doing role play, what other RP games you play and all that good stuff.

Ynaar: I started playing in March 2005 on a spanish server called "Los Errantes" (Fastriders in english). There I was initiated in the RPing way of WoW, wich at that time could be compared to what Moonglade has become nowadays...
I was a part-time role player, as I rolled a warrior/tank and I really enjoyed the role of tanking. When BC came out, I deleted all my characters and moved to the Alliance side as a Draenei shaman. There I learned about their lore and fell in love with them immediately. Sadly due to personal circumstances i had to sell my account before WoTLK came out. A year ago I found a way to play again. Back than I informed myself about the RP servers and such...I created a goblin at Defias Brotherhood but it was deserted so I came to to Argent Dawn.
Other RPG games that I play? On the internet only World of Warcraft but I am a fanatic of Tabletop RPG's, both as a dungeon master and as a player. I greatly enjoy them.

Firewire: Which ones for example?

Ynaar: I played from D&D 3rd, 4th & 5th edition to Call of Cthulhu, passing through Vampire: The Masquerade, Shadowrun, Superheros, Nexus, Star Wars RPG, d20 and Modern d20 and so on.
Firewire: What do you think about the Alliance RP scene on AD? Or the RP scene on AD in general? What are your RP - commnutiy highlights? F.e.: Your favorite RP events, guilds or community members? Ynaar: I find it lovely. With many guilds spread over different towns to bring it back to life, like the Kaldorei Community, various groups located at Hearthglen and Duskwood, and last but not least us the Sha'nai located at Elodor.
Sadly a bad name has been brought upon Stormwind because of its nature to hoard a lot of people, it is an exaggeratedly used place for role playing and I find that great! It brings life to something that must have life! But as the barrel gets bigger, more bad apples get in and I find that Stormwind is getting filled with... The kind of people that are so edgy that it cuts to touch them.
The RP scene on AD in general is lovely. It is constantly evolving to more original matters. My favorite events by far are the ones hosted by Acrona, but the ones that are for everyone to enjoy! She knows how to bring people together without interfering in the role play. The Shipwreck event was a lot of fun.

Firewire: What are the main RP hubs on alliance side?

Ynaar: Main hubs on the alliance side are Stromwind and Darnassus i'd say. But if you do a in-depth research you will notice that there are guilds all over the World of Warcraft. There is Duskwood, Hearthglen, Teldrassil, Elodor and many other places where a guild is currently located. The guilds on Argent Dawn are very welcoming and they will gladly host you at their base-camp.

Firewire: Can you tell me a little bit about the lore and activities of your present guild/guilds?

Ynaar: I am a Draenei role player and three guilds come to my mind. The first is the Voice of Argus, making its return, seems to host a wide variety of calmed relaxed role playing, but is for now only for Draenei.
The second is the Sha'nai, we host weekly town times at Elodor, called Sha'nai RP days! They are an invention of mine and everyone is welcome to join us in our role play, enjoy our conflicts. And the third is the Chaosborn, a guild that I lead with the aid of my trustful officer Ruvian (Ulguruk) which made a great comeback after many people asked for me to bring back the guild. Yesterday we had a cross-guild event and the next week do two more of these! We expect to proceed like this, mixing it up with lessons on Fel and Shadow energy, and preaching about the power of the legion of which we are cultists of.
I highly recommend to check out the Stormwind Navy for more militaristic role play. Alongside Footman and the Westfall Rangers.

Firewire: What game changes would you like to see from Blizzard to improve the role playing in WoW?

Ynaar: Cross-faction communication and extended toy times alongside no cool downs or straight make them end on logout or end on cancelled. I find that toys have great potential but they are not used enough.

Firewire: Why is cross faction communication important to you?

Ynaar: It is something that will allow role players from both factions that are neutral to communicate with one each other freely and enjoy more role playing together.

Firewire: What is your favorite tavern? 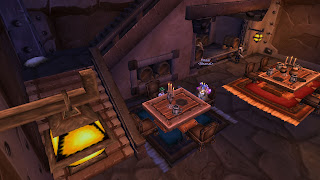 Ynaar: The one at Elodor. It has amazing views of Shadowmoon Valley.

Firewire: What is your favorite arena in WoW?

Ynaar: The one at Karabor. It is amazing.

Firewire: Who is your favorite NPC in WoW?

Ynaar: In all honesty? Adventurer Desii. I admire her patience to teach the child what a dog is and how she shows the child a few of the dog's tricks. She has been doing it for almost a year!

Firewire: Anything else you want to add?

Ynaar: That I find your initiative great and that I hope that it continues with other role-players!

Firewire: Thank you so much for your time and for this interview!!!